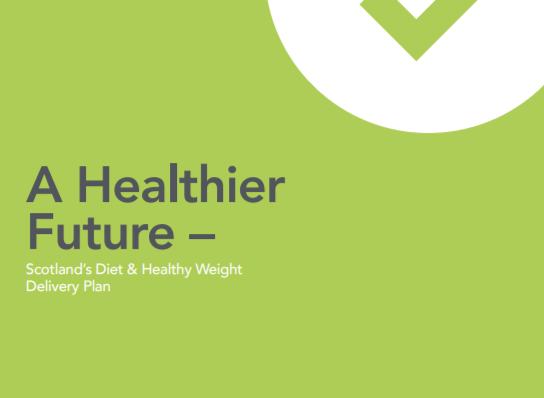 Note from the Editor: Following consultation which resulted in 362 responses, the Scottish Government’s  ‘A healthier future: Scotland’s diet and healthy weight delivery plan’ was published in July 2018. We asked several experts working in the field of cancer to provide their  comments on the new plan.

This eagerly-awaited report registers government recognition that action is required against obesity, and contains several valuable new actions.  However as is so frequent in such documents, they are buried in a sea of other listed initiatives, compiled because they might theoretically influence food choice or physical activity, and thus potentially impact on obesity.  All are well-intended, and might tend to benefit general health.  Governments like to tell voters that they are initiating or supporting large numbers of activities, but these will have little ultimate effect on obesity.

The strategy document is more incisive when it comes to supporting effective treatments for obesity.  It confirms that the successful multidisciplinary Scottish Football Fans in Training project will continue to be supported, and a total of £42m over 5 years will include intensive weight management for people whose weight gain has led to type 2 diabetes.  This follows the publication of the Glasgow and Newcastle-based DiRECT trial, in which the Counterweight-Plus programme has led almost half of all its participants into a remission of type 2 diabetes, no longer diabetic and off all medication at I year. The key to success in both these projects has been in using well-researched evidence-based Scottish-designed interventions, and in collecting, analysing and publishing the complete results from every person who attempted the treatment.  Successful strategies are those based on solid evidence.

All strategies need to be kept under review.  The announcement of a monitoring and evaluation framework is reassuring.  One suspects the wild pledge to reduce ‘childhood obesity’ by 50% by 2030 may need to be revised downwards (and it is by no means certain that this would greatly reduce later adult obesity, without similar effort across the lifespan).  There is still no specific target for adult obesity, when the vast majority of complications, disabilities and costs arise.  Having no target makes it difficult to evaluate a strategy or its implementation.

Radical or deliverable?  What is most important at this stage?  When you read the Diet and Healthy Weight Delivery Plan you could be saying I have heard all this before, nothing new here.  You wouldn’t be wrong.  In July 1996 the Scotland Office launched Eating for Health: a Diet Action Plan for Scotland.  In it they recognised “widespread and incessant promotion and advertising of foods which should form only a very small part of the overall diet”.

20 plus years on and we are still having the conversation about the impact of promotion and advertising.  In the meantime, billions of pounds have been spent by the industry influencing what we eat and ultimately influencing our weight as a nation.

So, however much we yearn for radical action, the outstanding issue is the implementation of change.  Delivery of change in the food environment can only be brought about by regulation.  The radical nature of this year’s plan may be that it is the first to deliver change. Let’s hope so.

The publication of Scotland’s obesity strategy provided a vital opportunity to tackle the obesity crisis in Scotland head-on. Breast Cancer Now welcomes the commitment in the strategy to addressing the obesogenic environment, particularly the emphasis on encouraging people to make healthier choices when buying food. The strategy committed to consulting in the autumn on measures to restrict the promotion and marketing of unhealthy food – we look forward to participating in this consultation and urge the Scottish Government to follow this consultation with swift legislative action.

We are disappointed that the obesity strategy action plan does not include a commitment to programmes such as ActWELL which aims to make use of ‘health defining’ moments to identify and support people to make positive lifestyle changes. The ActWELL trial identifies women through the breast screening programme and seeks to reduce their risk of developing breast cancer through one-to-one coaching to help them to make sustainable lifestyle changes, focusing on physical activity, diet and body weight. ActWELL was highlighted in the consultation document prior to the publication of the strategy and we are disappointed that the importance of ‘health defining’ moments is not included in the action plan.

What the current diet and obesity plans illustrate starkly is that Governments cannot turn round the epidemic of obesity by themselves. Above all, food and drink retailers have to play their part.  We know that marketing works, that their prime reason is to increase sales and profit and not health, and at present it encourages us to eat more of the things we need to eat less of.  Unless retailers change their business model which pushes for greater and greater consumption without regard for the public health consequences, Scotland will not be able to tackle our dangerous and destructive obesity epidemic effectively.

It’s simply not enough and will never make any difference. Or, it’s a heavy handed state overreach.

Commentaries deriving from both sentiments inevitably follow any actions that Scottish Government would propose to tackle the nation’s obesity crisis. Political reality dictates that achieving some balance between the two is their task, and we very much support their level of ambition.

For those who don’t smoke, overweight and obesity are the biggest preventable risk factors for cancer and, unfortunately, prevalence is now across the majority of our population. All in relatively recent times too. Some analysts will talk about historically diminishing physical activity levels leading to this, or increasing them being the biggest solution available. But the evidence just won’t back this up. Physical activity levels are, in fact, higher than ever, and even the calories burned in a daily 5k run can be outdone by a chocolate bar. (Of course, physical activity has excellent cancer  prevention benefits, and for wider physical and mental health, but the topic in hand is Scotland’s obesity crisis).

We were all leaner not that long ago and the historical shifts to observe around that are those in our food environments. Decreasing numbers of independent greengrocers and whole food shops. Increasing processed offerings. Normalisation of snacking. Trends of added sugars. Rise of fast food. Hugely effective research-based marketing and promotion techniques. Swathes of new advertising channels. All fairly unadulterated thus far and inextricably connected to our nations’ overweight status.

That doesn’t make us all unconscious consumers, utterly at the whim of commercial forces- but there are few who avoid their impacts. The body of science, research and translation into our supermarket  environments is vast and formidable- undoubtedly encouraging us all in our purchasing. Not all these factors are negative in of themselves but they are when the majority of the promotions, marketing and nudging is towards the foods of least nutritional value. Each day we’re taking in an additional 110 tonnes of sugar via promotions alone! The various proposals to begin regulating this have to be welcomed and supported.

At Cancer Research UK we have  focussed particularly on junk food multibuy offers- with evidence showing they can drive  additional unplanned purchases and increase consumption. Interestingly, public polling also shows support for their restriction- perhaps recognising the help it would give in tipping the balance of offers to making the healthy choice the easier one. We’d especially want to see  these offers regulated as voluntary efforts to date have simply not impacted sufficiently.

A better future is in sight, with a range of helpful shifts to our food environment that we should all support. Let’s help bring across the line this commendable plan. 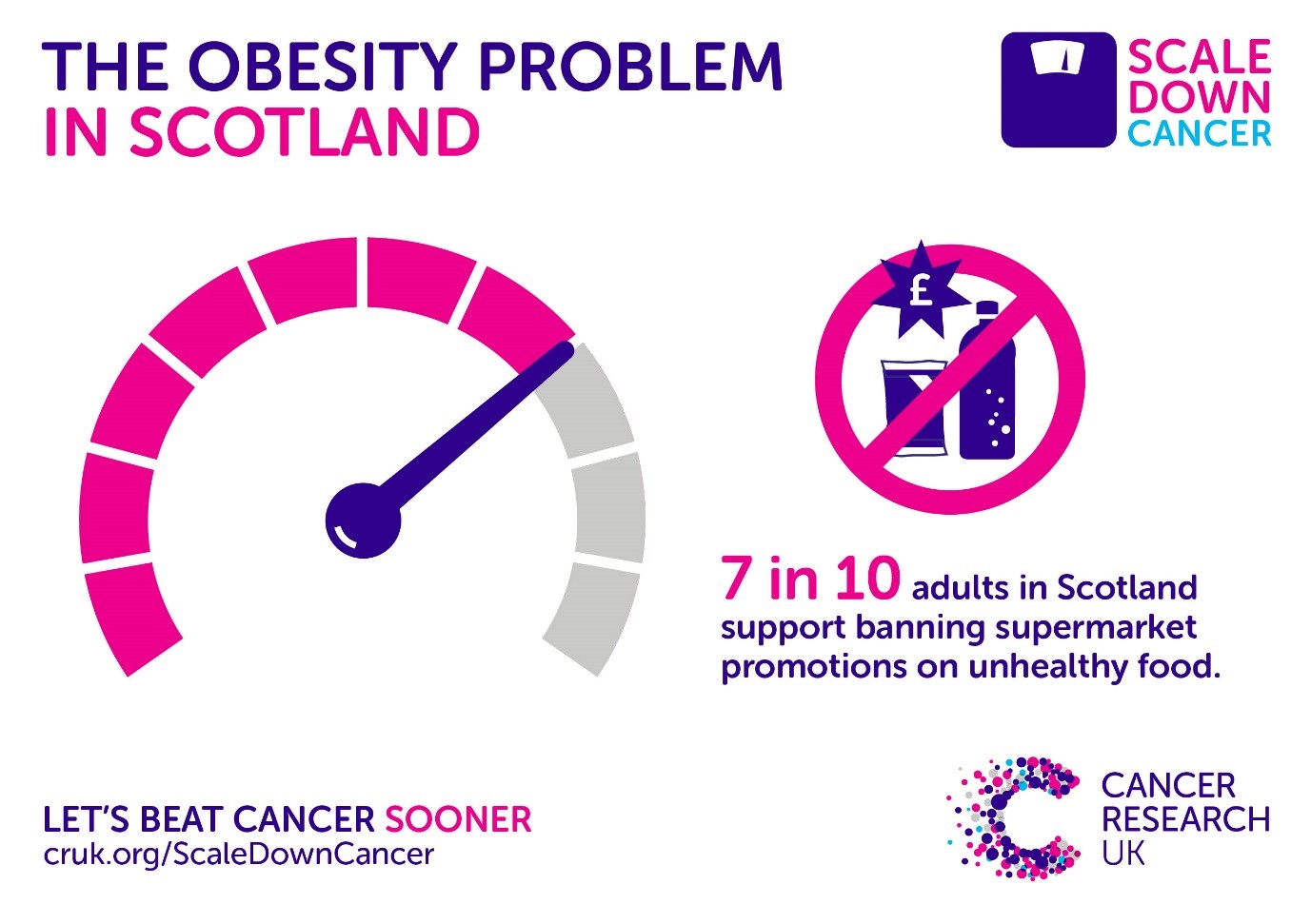