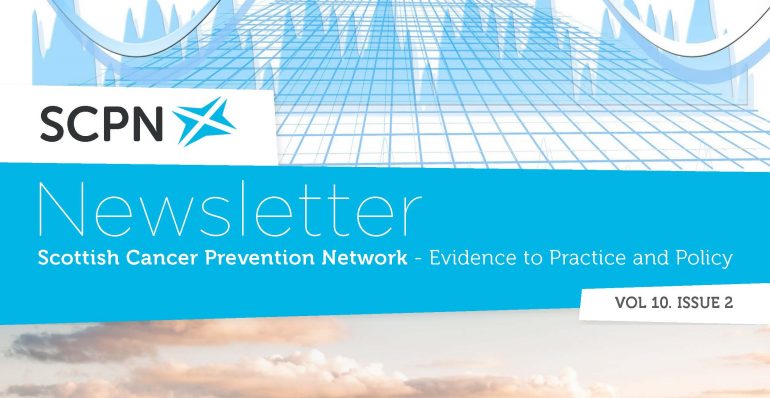 Scotland has long had the unenviable reputation of being one of the unhealthiest nations in the world, but are there signs that change is in
the air?

The results of a UK survey carried out by the World Cancer Research Fund certainly give some grounds for optimism. It found that people in Scotland are the most aware of the link between poor diet and cancer and more inclined than
people elsewhere to do something about it (for more info see page 15).

This is great news for us at the SCPN as we have now been working for 10 years to raise awareness of the importance of a healthy lifestyle in reducing the risk of cancer.

These survey results suggest that the message is getting through with almost two thirds of the Scots who took part in the survey saying that they would like to have a healthier diet.

It can be challenging to convince people to snack on an apple rather than a sugary cake, especially when large sections of the food industry have a vested interest in selling unhealthy products. However, we have kept at it over the past decade and would like to think that the WCRF’s survey shows that a positive difference is being made.

We were delighted in January to be named Public Engagement Project of the Year in this year’s Stephen Fry Awards for Excellence in Public Engagement with Research. We have also been working closely with colleagues in Ireland who have used the SCPN as a model to set up a similar organisation in their country, focused on cancer prevention.

Meanwhile our parent body, the Scottish Cancer Foundation, continues to be the only charity in Scotland dedicated to promoting research into cancer prevention.

It may be early days but any signs that the door may be opening to better health in Scotland are very welcome. That should encourage all of us to push that bit harder.