Towards a Generation Free from Tobacco

Scotland’s new five year tobacco strategy, ‘Creating a Tobacco-free Generation’, was launched on March 27th this year. It sets out a plan for action across the key themes of health inequalities, prevention, protection and cessation. Headlining the strategy was a commitment to setting 2034 as a target date for reducing smoking prevalence to 5%. Other measures included a requirement for smoke-free hospital grounds by March 2015, a commitment to a national marketing campaign on the dangers of second-hand smoke in enclosed spaces, and a strong commitment to introducing standardised packaging of tobacco products. For the strategy, see:

More to be done…

There was no mention in the new strategy of possible legislation to protect people from tobacco smoke in vehicles; however Jim Hume MSP has launched a Private Members’ Bill on Smoking in Cars with children under 16 present. ASH Scotland supported the launch and the principle of a debate on legislation, though ASH Scotland’s position is a wider one to cover smoking in vehicles with more than one person, so that all are protected. The consultation will run to 30 August, and details are at:

Also omitted from the national strategy was a firm position on a tobacco policy for the 2014 Glasgow Commonwealth Games. Details of the campaign are on the ASH Scotland website, including a briefing note, the opportunity to register support, and the letter sent to the organising committee, which was supported by health organisations in 16 commonwealth countries. ASH Scotland is calling for a comprehensive tobacco-free policy in venues, to support the drive towards a generation free from tobacco.

On 21 June the European Tobacco Products Directive cleared a key hurdle and goes forward with recommendations for 65% picture health warnings on packs, a ban on characterising tobacco flavours such as menthol, the possibility for member states to introduce standardised packaging, and health warnings for nicotine containing products below a certain threshold, with medicines regulation for those above.

Clearly there is plenty to debate and move forward with as we reach towards a future in which a child born anywhere in Scotland this year reaches the age of majority in communities where smoking is minimal and tobacco use a thing of the past.

This article, written by Sheila Duffy from ASH Scotland, was published in the SCPN Newsletter Volume 4, Issue 3.
Read the full issue here: 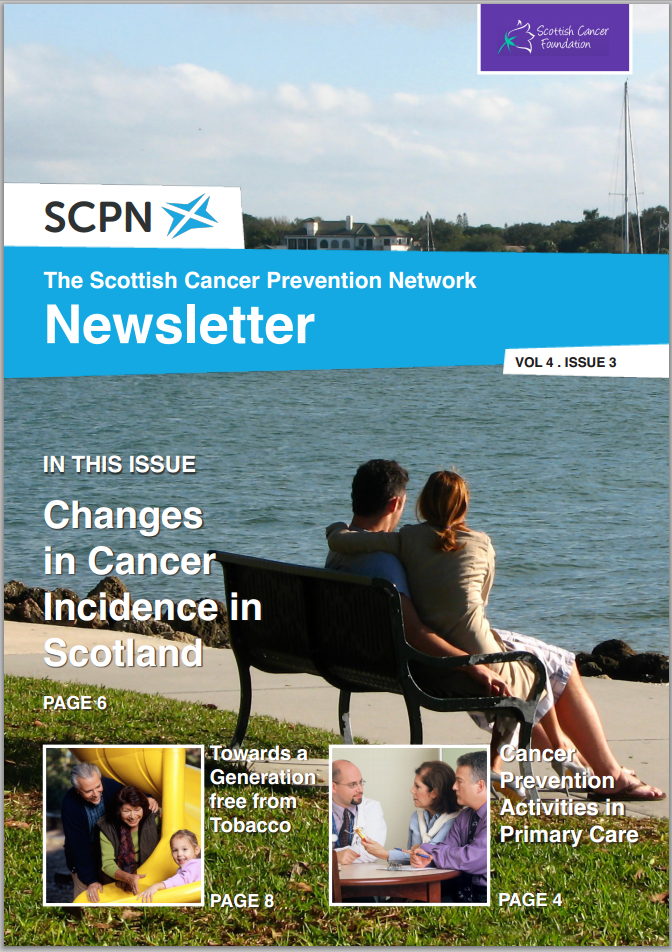 In this issue, we cover the changes in cancer incidence in Scotland, moving towards a generation free from tobacco, activities in primary care towards cancer prevention, and more.