Incidence of obesity-related cancers in Scotland

The incidence of cancer in Scotland has been decreasing over time, when taking the age and sex demographic of the population into account. In the decade to 2017, incidence fell from 655 to 619 cases per 100,000 people, a decrease of 5.5%.
Within this positive picture however, is evidence that certain cancers are increasing in number, and that the cancers at some of these sites could be associated with increasing obesity in the population.
https://www.cancerresearchuk.org/health-professional/cancer-statistics/risk/overweight-and-obesity.
Figure 1 shows the change in incidence from 2008 to 2017 for all cancers, and for a selection of cancers associated with obesity. In contrast to the all-cancer incidence, cancers of the liver, kidney and corpus uteri have seen increases of 23.8%, 41.1% and 16.9% respectively.
Colorectal cancer, although also associated with obesity, has not seen the same trend, with a decrease in incidence of 16.4% in the same time period. However this period coincides with the introduction of bowel cancer screening in Scotland. This would be expected to initially increase incidence, as lead-time to diagnosis is reduced, followed by a return to pre-screening rates if the underlying risk remained constant. An additional reduction in rates would also be expected, due to the primary preventative effects of removing pre-malignant polyps.
Figure 2 shows the colorectal cancer incidence change for under and over 50s, from 2002 to 2017, relative to the 2002 value. Values of above 100 represent an increase relative to 2002, values below 100 represent a decrease. The over 50s group see an initial increase at the time of screening introduction, with a subsequent decrease to 16% below the 2002 level by 2017. In contrast, the under 50s see an increase of 36% from 2002 to 2017. It is important to note that, although a large increase, the incidence rate in the under 50s is still well below the over 50s (6.8 vs. 179.1 cases per 100,000 in 2017).
The increase in colorectal cancer incidence in Scotland in the under 50s may be a consequence of high levels of obesity without the preventive benefits of screening. Although the risks are arguably too low to justify extending bowel screening to younger ages, there is potential to reverse the increasing rates of bowel cancer – and those other cancers mentioned above – through effective weight management programmes.

Further Information
All statistics are based on data from the Scottish Cancer Registry. Further data is available on the ISD website’s cancer statistics pages. https://www.isdscotland.org/Health-Topics/Cancer/Cancer-Statistics/.

Acknowledgement
These statistics use data shared by patients and collected by the NHS as part of their care and support. 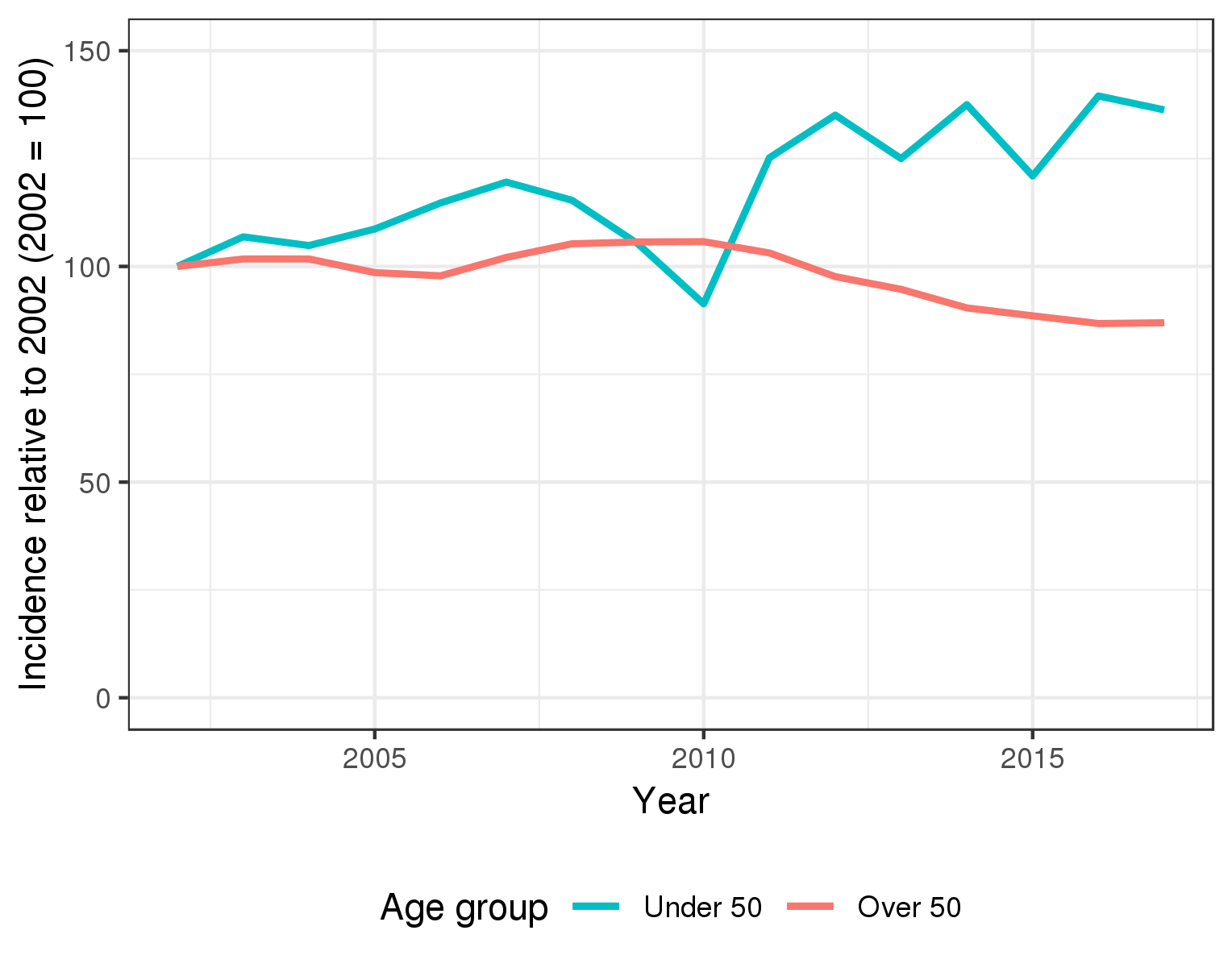