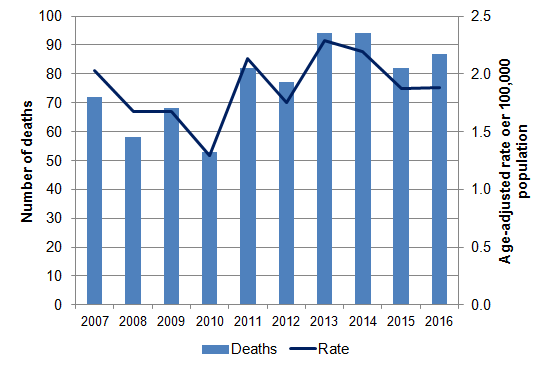 It is often thought that skin cancer is uncommon because we don’t see the statistics. In fact skin cancer is the most common cancer in  Scotland largely due to UV exposure – not usually deadly but not desirable. We asked Andrew Deas, Information Services Division, NHS National Services Scotland to tell us more.

Incidence (1)
The main risk factor for skin cancer is exposure to ultra-violet radiation, either from the sun or from sun-beds. Although non-melanoma skin cancers are rarely fatal, they represent a significant workload for the health service. Much of the treatment for non-melanoma
skin cancer can be given in an outpatient or GP surgery setting. In 2016, 11,677 cases of non-melanoma skin cancer were recorded by the Scottish Cancer Registry. This is over a quarter of all cancers diagnosed in Scotland in 2016 and almost 90% of all skin cancers. In  comparison, the next most common type of cancer in Scotland is lung cancer, of which 5,045 cases were diagnosed in 2016. Around 70% of the nonmelanoma skin cancers diagnosed in 2016 were basal cell carcinomas. This affects the cells at the bottom of the outer layer of the skin (the epidermis).
Basal cell carcinoma does not usually spread to other parts of the body and rarely causes death. Squamous cell carcinomas formed 29% of
cases in 2016. This affects the cells lining the top of the epidermis. There is a small risk (between 2-5%) of squamous cell carcinoma spreading to other parts of the body (usually the lymph nodes)(4). The remaining 1% were other specified and unspecified types of carcinoma.
Nearly three-quarters of cases diagnosed in 2016 were in people aged 65 and over. Nearly three-fifths of cases are diagnosed in men (6,831
cases diagnosed in men and 4,846 cases in women). The age-adjusted incidence rate in men is nearly double that of women (figure 1). 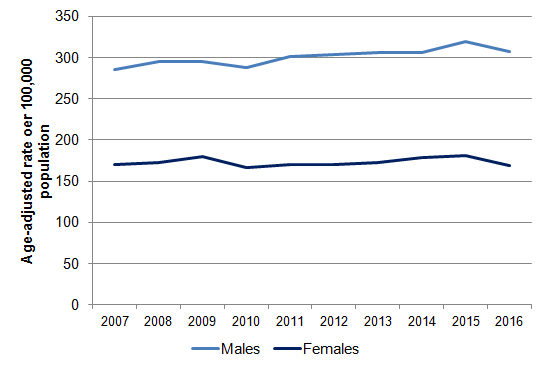 Acknowledgement
Our publications use data shared by patients and collected by the NHS as part of their care and support.